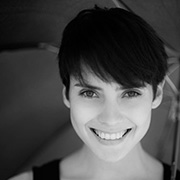 Born in Australia, Jessica began her ballet training at the Ballet Academy Northside. In 2002 she joined the SCECGS Redlands Ballet and Dance Academy in Sydney and four years later she joined the Ecole Ballet Studios.

During 2009 and 2010 she performed with Rambert Dance Company, and she graduated from Rambert School in 2010.

In September 2010 she joined the Compañía Nacional de Danza 2 in Spain.