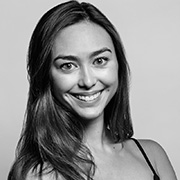 In 2010 she completed three years training at Rambert School. During her final year of training, she performed A Linha Curva by Itzik Galili with the Rambert Company for their National UK Autumn tour Seven for Secret.

Chloe moved to Barcelona in 2012 to join the junior contemporary company IT Dansa under the direction of Catherine Allard. During her two years with the Company she performed works by Rafael Bonachela (Naked Thoughts), Alexander Ekman (Whim), Ohad Naharin (Kumyot) and Sidi Labi (In Memorium).

Read more about Chloe’s time at Rambert School in our Student Stories section.