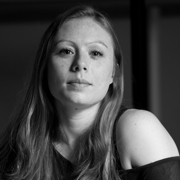 Siân Hopkins trained at the Legat School of Dance and went on to gain a place at Rambert School, graduating with a BA in 2006 and MA in Advanced Dance Practice with Distinction in 2012.

She worked professionally with Inland Pacific Ballet as a soloist, with Stephanie Gilliland of Tongue Dance in California and with Peter McCoy Dance Company in Munich.

Since her return to London, Siân has been a principal artist with Moving Visions Dance Theatre, and since 2011 has also been Rehearsal Director for the company.

Since 2012 she has taught contemporary dance at institutions around the UK, as well as guest teaching in Japan, Singapore, Vietnam and Canada. Siân has choreographed for various cathedral based projects, Cantata Dramatica’s operatic productions and Nexus Dance.