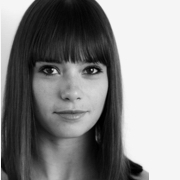 Nicole was born in São Paulo, Brazil, where she trained at the Cisne Negro Dance Studio. After being a finalist of the Adeline Genée Competition, she received a scholarship to study at Rambert School, where she graduated with a first class honours degree.

Since 2006, as a freelance dancer, she has been a member of the Mark Bruce Company and was part of the original cast for Dracula, winner of the Sky Arts Awards in 2014. Nicole has recently performed with Darren Ellis Dance and Caroline Bowditch and has taught both ballet and contemporary dance at a number of UK dance schools, as well as workshops around the world. She is currently studying for her MA in Contemporary Dance, with particular focus in education, at London Contemporary Dance School.

Since autumn 2015 Nicole has worked as Production and Rehearsal Director at Rambert School on a part-time basis.