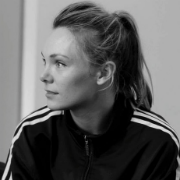 Hannah began her training at Elmhurst Ballet School and then went onto London Contemporary Dance School where she completed her BA Hons and later her MA with distinction.

In 2007 Hannah joined Richard Alston Dance Company, with whom she performed for six years both nationally and internationally. In late 2012 Hannah was nominated for the National Dance Award’s Outstanding Female Performer. As a freelance dancer she has performed for many other leading companies and choreographer’s, notably New Movement Collective, Didy Veldman, Ashley Page, Darren Ellis and Mark Bruce. Hannah was part of the original cast for Bruce’s ‘Dracula’ which was winner of the Sky Arts South Bank Award 2014.

Alongside performing Hannah has taught in many of the UK’s dance conservatoires on both the undergraduate and postgraduate programmes at London Contemporary Dance School, at the Royal Conservatoire of Scotland, Rambert School of Ballet and Contemporary Dance, Central School of Ballet and at Trinity Laban, as well as for companies Richard Alston Dance Company, Matthew Bourne’s New Adventure’s and Mark Bruce Company.