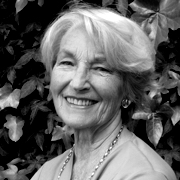 Born in Manchester, Anya Sainsbury started ballet training in Berkeley, California with Dorothy Pring and Theodore Kosloff. In 1947 she returned to England with her family and joined Sadler’s Wells Ballet School (now The Royal Ballet School). She joined The Royal Ballet Company in 1951 as Anya Linden and started dancing principal roles in 1957 including Coppélia, Giselle, Cinderella, The Firebird, Sleeping Beauty, Sylvia, and Swan Lake.

She married John Sainsbury in 1963 and retired in 1965. They have three children and eight grandchildren. She has organised and worked on the production of five ballet galas in aid of One Parent Families, the most notable being ‘A Good Night’s Sleep’ with Wayne Sleep and the ‘Anthony Dowell Ballet Gala’. She continues to coach at The Royal Ballet School and Rambert School. In 1987 she founded the Linbury Prize for Stage Design and was its chairman until 2010.