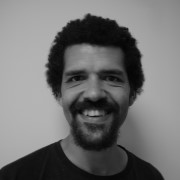 Seke Chimutengwende trained at London Contemporary Dance School from 2001 – 2004 and went on to perform with companies such as DV8 Physical Theatre, Lost Dog and Fabulous Beast.
Since 2006, Seke has trained extensively in improvisation with a variety of practitioners and with Andrew Morrish in particular. Seke has performed over 60 solo improvisations internationally and performs ensemble improvisation with Neat Timothy.
Seke began making choreographies in 2011, including The Time Travel Piece which was a semi-finalist for The Place Prize 2012 and Black Holes, made in collaboration with Alexandrina Hemsley, which was selected for The British Council Showcase in Edinburgh 2019.
Since 2018, Seke has also worked as a movement director for theatre productions at The Yard Theatre, Battersea Arts Centre and The Gate Theatre.
Seke has been a regular guest teacher at Rambert School since 2011 and also regularly teaches at London Contemporary Dance School, The Royal Central School of Speech and Drama and Goldsmiths University amongst others.