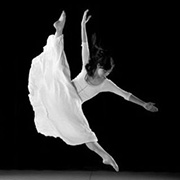 Mari studied at the Sendai City Ballet in Japan from the age of 6, later moving on to the Imamura Ballet Studio and the Canadian Royal Winnipeg Ballet Summer course, eventually joining the Rambert School at the age of 16 where she studied between 2004 and 2007.

She has been part of Matthew Bourne’s New Adventures since 2010, and has since performed in Swan Lake, The Nutcracker, Edward Scissorhands, Dorian Gray and Sleeping Beauty.