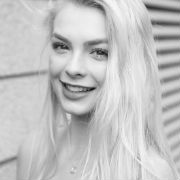 Hayley was born in Florida and moved to Newcastle in the UK at age 3 where she started dancing at her local dance school Dorothy Buggy/Katherine Brett Academy of Dance. Here she trained in RAD Ballet and ISTD modern to Advanced 2 standard. At the age of 11 she began the contemporary CAT programme at Dance City for 4 years where she performed works by Neville Campbell and Anna Watkins. At 16 she joined Rambert School of Ballet and Contemporary Dance and graduated with a First Class BA (Hons) Degree.

Whilst at Rambert School she has had the pleasure of performing works choreographed by Mark Baldwin, Ashley Page, Theo Clinkard, Russell Maliphant, Arielle Alexander, Dan Wagoner, Sarah Dowling and Joseph Mazilier. In her second year she had the pleasure of collaborating with London Schools Symphony Orchestra in pieces choreographed by Mark Baldwin and Arielle Alexander, which were performed at the Barbican.  Outside her training she worked on the Rambert School collaboration between local schools as part of the Aspire programme teaching GCSE dance students and working on a piece of choreography with them.  Also during her training she performed at the Sage Gateshead in the Brass in Concert Championships, as a dancer in choreography by Neville Campbell as part of Tredegar Town Band. Hayley has also had the pleasure of understudying ‘A Linha Curva’ by Itzik Galili for Rambert Company’s tour. Following graduation she appeared in Nina Nesbitt’s music video ‘Loyal to me’ as part of a duet and Reebok’s ‘Take a different path’ campaign video and joined Emergence with Joss Arnott’s company where she tours and works towards an MA.