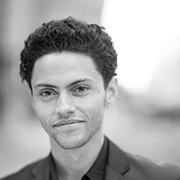 Dane Hurst was born in Port Elizabeth, South Africa. His training included classical ballet and hip hop/ street dance. He won the national dance competition in Johannesburg in 2002, and received a Linbury Trust and Ernest Oppenheimer Memorial Trust scholarship to train at the Rambert School in London, 2003. Whilst at the school Dane received the runner-up prize at the Barbera Geoghegan Award, Cecchetti dance competition and joined Rambert Dance Compay as the first recipient of the Sally Gilmour Memorial Trust bursary in 2004. In 2006 he was nominated for best emerging dancer of the year and received the Spotlight Dancer of the Year award by the Critics Circle Dance Awards, 2007, U.K.

He joined Phoenix Dance Theare in 2007 and has made guest appearances for the National Dance Company of Wales, Curve Foundation, Mad Dogs Dance Theatre and Rambert. After returning to Rambert in 2009, Dane was commissioned to choreograph works for the Place Prize, the Rambert Season of New Choreography, at the Linbury Theatre in Covent Garden in 2010 and later commissioned by Fruit for the Apocalypse, to create three site-specific works at the former Commonwealth Institute for the INTRANSIT festival in 2011. He choreographed the MAMA’s award-winning piece ‘Anima Mundi’ in collaboration with video artist Kira Zhi for the Kinetika Art Fair in London and was commissioned to create for the 16th International Solo Dance Theatre Competition in Stuttgart, Germany, in 2012.

He choreographed for Rambert’s Season of New Choreography at the Queen Elizabeth Hall in 2012 and for the Barbican as part of their Beyond Barbican season, Dalston House, in 2013. Dane was voted joint 3rd in Dance Europe Magazine’s Top 100 dancers 2011/12 season, nominated for Outstanding Performance, Modern, by Critics Circle National Dance Awards 2013 and received the Best Male Dancer of the Year award in January 2014. He has recently completed a Master’s degree in Choreography with Central School of Ballet and the University of Kent.

Dane is currently working as an independent Creative Director, Choreographer and Dancer and is the Founder and Artistic Director of the newly formed Moving Assembly Project.