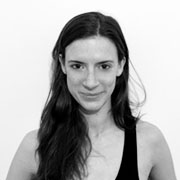 Carys works from London as an independent dance artist. She began training at Swindon Dance before continuing her studies at the Rambert School.

Upon graduating, Carys joined Russell Maliphant Company (’11-’15), collaborating and performing in three new productions. While with the company she worked as Choreographic Assistant for creations with English National Ballet and Bayerisches Staatsballet, and was merited an ‘Outstanding Female Performance’ nomination in the Critics Circle Awards.

Since 2016 Carys has been working with Michael Keegan-Dolan’s Teaċ Daṁsa, collaborating and performing in the creations Swan Lake / Loch na hEala and the Olivier Award nominated production Mám (’19-present).

Carys has worked extensively in the commercial world as performer, including music promotion work under choreographers Akram Kahn and Frank Gaston/Beyonce as well as working as a choreographer, devising movement for film and print work.