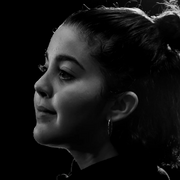 Arielle Smith is graduate an now an Olivier award nominated choreographer who has always had a passion for choreography. She rose to stardom after choreographing ‘Jolly Folly’ for The English National Ballet which has now been nominated for Oustanding Achievement in Dance in the Olivier Awards.

Arielle started her training at the Hammond School in Chester and then went on to train at Rambert School. From a young age Arielle has had a passion to choreograph, and it was at the National Youth Ballet founded by Jill Tookey, that Arielle really discovered choreography.  In her final year as a dancer in the company she was the very first recipient of the Nijinska cup for an outstanding female choreographer. She then went on to choreograph several works for the company, Inversion, Athena, Suitesong and T-Symmetry.

She has also recently been celebrated in The Stage 25 list as one of 25 individuals to become the future stars of the UK theatre industry, having also been named on The Guardian’s ones to watch for 2022.

Arielle is currently choreographing Blackmail (Mercury Theatre), directed by Anthony Banks, and has a number of classical commissions and theatre projects in development moving forward into 2022. She has already choreographed for some of the largest ballet companies around the world, including Matthew Bourne’s New Adventures where she was Associate Choreographer on his Romeo & Juliet.

Television and Film credits include: ‘Silent Me’ (in collaboration with designer Maxwell Nicholson Lailey), ‘Beyond Ballet’ , Emerging choreographers of the National Youth Ballet (BBC London News)